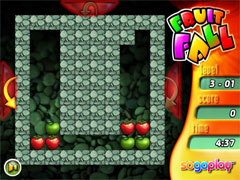 Fruit Fall is a puzzle game in which every level needs to be cleared of fruit. This can be accomplished by placing three or more pieces of the same fruit next to each other, making them disappear.

Sounds simple enough. However, the only way to move the pieces of fruit, is to rotate the whole field and let gravity do its work.

the free, browser based web version features 1 gameplay mode and only a small selection of levels giving only a small taste of the full Deluxe game.

the deluxe version is available in English, Spanish and French.

the deluxe version can be tried for free.

DEVELOPED FOR AND WITH

Fruit Fall was developed for and with SogoPlay

Both versions are based on an earlier game of the same name developed by Tony Williams.