the website used to keep the thief community up to date with the latest developments, required some art:

the visual concept of the site was conceived by Avalon.
all art was drawn using Photoshop5.5 in combination with a pressure sensitive tablet.

the reason for introducing additional items to the simpler icons -the quill, paintbrush and hammer- was to keep them in balance with the visually complex victrola icon. 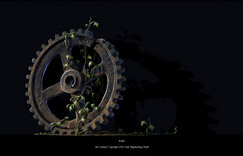 The concept behind the cover image is a near literal interpretation of the "Shadows of the Metal Age" title:

to get a correct projection of the teeth of the gear 3d-modeling software was used, which is odd because if anything doesn't look 'right' about the image, it's the shape of the gear :/

All coloring, highlighting, the crack and the vines -the latter rather obviously- were drawn by hand. 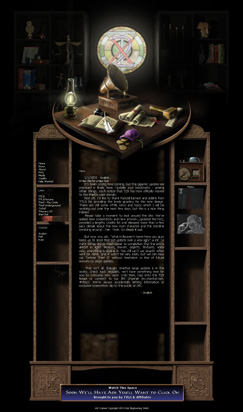 All elements of this page are drawn from scratch using photoshop and a pressure sensitive tablet.

The window design is based on a drawing by Randall Ernest, as is the background cupboard layout.

The scales in the background cupboard (left of the window) are based on an early concept drawing.