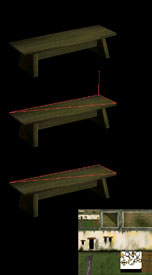 the core itself has been extended to use 16bit and 32bit color lookup tables (greatly enhancing the image quality) but the textures still are limited to 8bit images.

a basic interface was developed to import, texture map and smooth dxf-polygon models.

The dxf-importer sorts the faces of the object to create optimized BSP-trees. The algorithm used does have some drawbacks: every object is considered to have a convex surface, in other words, no object may intersect the 'shrinkwrap' of another object in any way. Placing a box between the legs of a (single object) table would cause visual errors. To implement a feature like that, the legs of the table should be defined as separate objects...