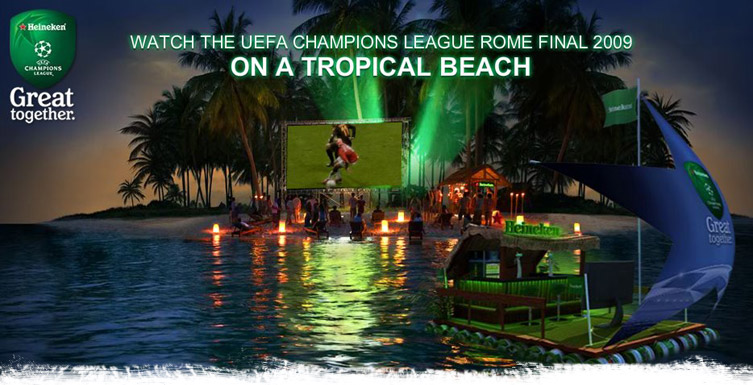 The Starfinal is a yearly event hosted by Heineken International focused on the UEFA Champions League final. It is a luxuruous party for soccer/football fans, held at a beautiful exotic location somewhere in the world. In 2009 the location was in Thailand.

Invites to the party can be won via the online Star Final Event. Which in 2009 consisted to two phases: 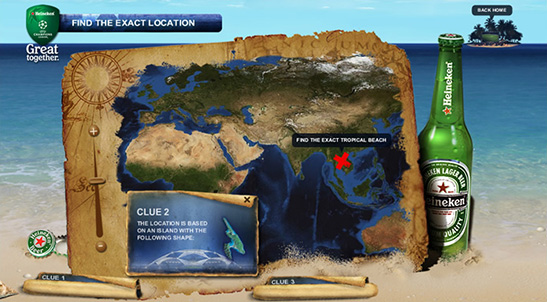 Technically the Googlemaps api led to a couple of problems, the copyright notice and the googlemaps logo found in the bottom corners are required to be visible at all times but the required orthogonal edges wouldn't fit the treasure map feel. A solution was found in using some runtime exploration through the googlemaps component layout and insert the torn edges of the map between the notices and the visible map.

After the location is found, the second phase begins, the raft race. In 2008 the location was in South Africa, in 2009 Thailand, so the virtual race would be across the indian ocean.

Each player was to build/customize their own raft using a number of predefined raft types adorned with custom colored sails featuring various patterns and symbols, and selecting their flag.

To keep the amount of image data down the sails are rendered and animated in real-time in 3D. The different lighting situations (day, dusk, night, dawn) were predrawn onto a separate texture that was multiplied with the custom sail graphic texture.

The race is won by points. Points can be gathered in two ways.

At selected distances during the race there will be quizes. For each correct answer a player earns points, all combined these would make up roughly 50% of the score.

To further link into the "Great Together" slogan of EUFA and Heineken, additional points are gained by joining a fleet. The larger the fleet the more points are won every minute, even when not online, just by sailing in that fleet.